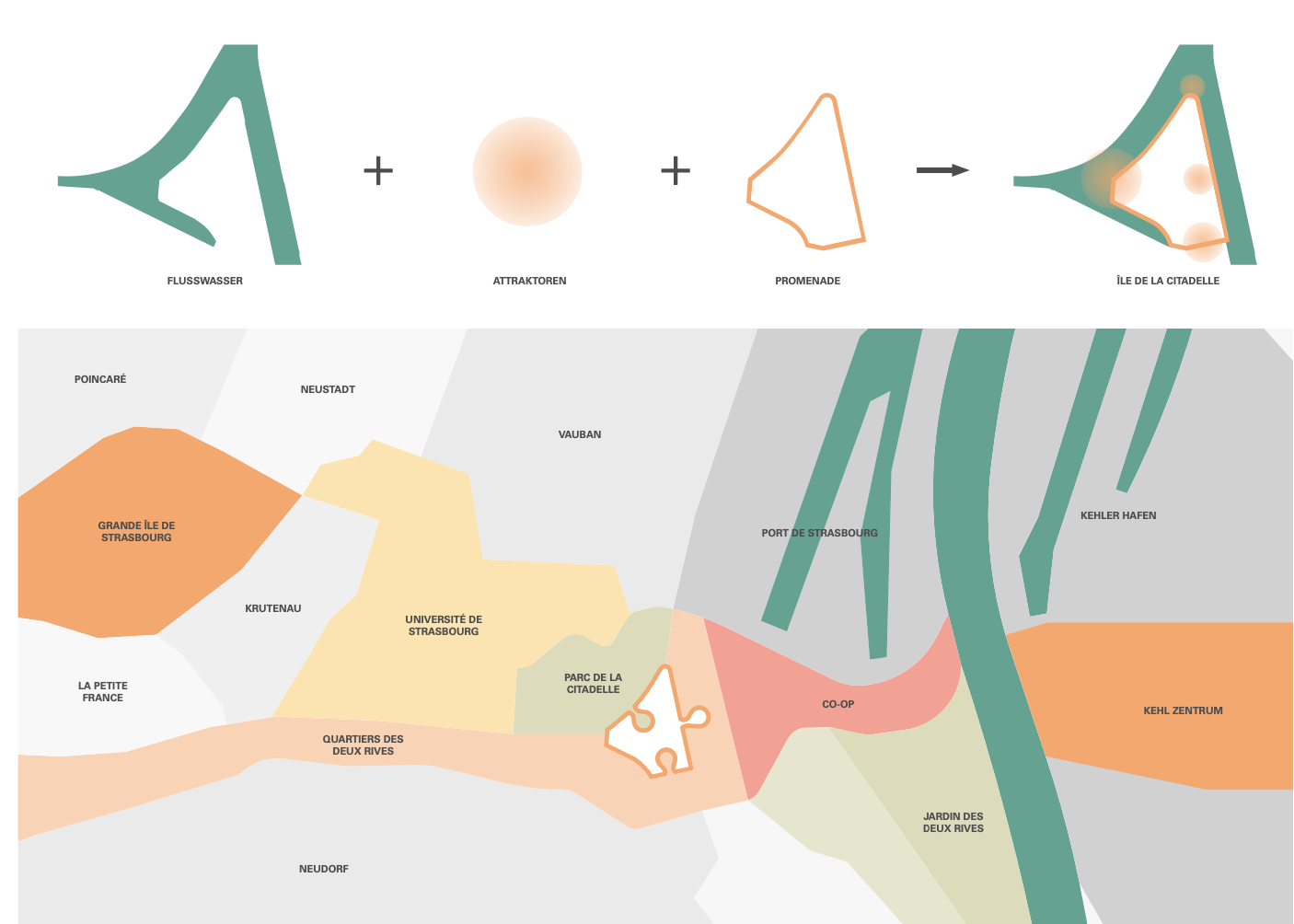 The Citadelle area is a junction between the surrounding districts of Strasbourg and forms a center between Strasbourg and Kehl. The quarter is almost completely surrounded by still „river water“. Empty buildings of red brick and steel halls on the water, which serve for ship repair purposes, shape the western part of the peninsula. A green earth wall separates the east from the west side.

Through our concept, we would like to preserve as much as possible of the existing situation.
A footbridge, which runs along the edge of the bank, should strengthen the connection to the water. This works as a closed band. By means of a filter channel at the level of the bus stop, we want to extend the peninsula to form a complete island, supporting the continuous bridge. The channel fulfils the purpose to purify the river water to make it floatable. Several attractors play on the jetty on its way around the area. The jetty runs partly directly at or on the water or along the quay wall.

It widens at several places:
Starting with a platform (concerts, sports, lingering) on the water next to the bus stop, the footbridge continues at the water level along the quay wall.

At the first existing hall, which we convert into a bar (bar in combination with a greenhouse), opens up the footbridge to a floating green area. Further along, the quay stairs lead to the top. At the western tip of the area, you have a good view by a slight elevation of the footbridge
across the river to the park on the other bank and in the direction of Strasbourg. From here you have
also view to the river bath, which has its entrance a little further along the footbridge. Here
the footbridge opens to a square (gastronomy, roasting, co-working space).
If you follow the footbridge further to the north, you will reach a river beach, which has a natural counterpart to the river bath. At the northern tip, the footbridge in the form of a circle protrudes into the water-in. On the eastern side, it winds downwards towards the water, on the other side it winds its way down to the side he climbs up. So you can swim from the beach under the arc of the circle and lie down on the outer side of the jetty. Furthermore, the jetty of the quay wall follows on the very urban side of the area. The footbridge runs across the water in two places away from the wharf. The jetty docks again at a quarter square. Here you will find a generous water surface. This is almost only a water level and emits water mist in phases. Old and young can refresh himself here. The next place where the jetty is docked again at the quay is a marketplace. Here we have planned a large market hall. On this side, larger container ships can be and supply fresh goods for the market. In addition, we have here the company Batorama to the ground floor, which was originally located in the halls on the water in the same building. The boats can be directly reached through a canal, which is connected to the river under the building into the workshop. The part of the market hall, which leads to the remaining residential development-oriented includes from the first floor to the roof student apartments. In front of the inclined glass facade of the hall are several retracted gallery floors, which are played by a cafe. The market stalls are located on the ground floor and are distributed as follows the area inside and outside the market hall. 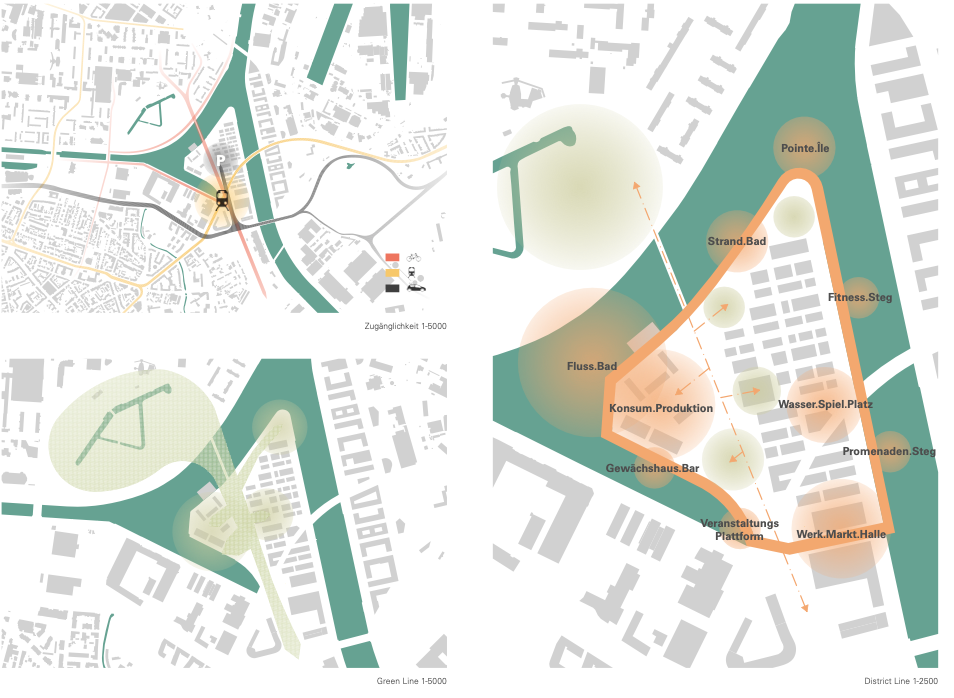 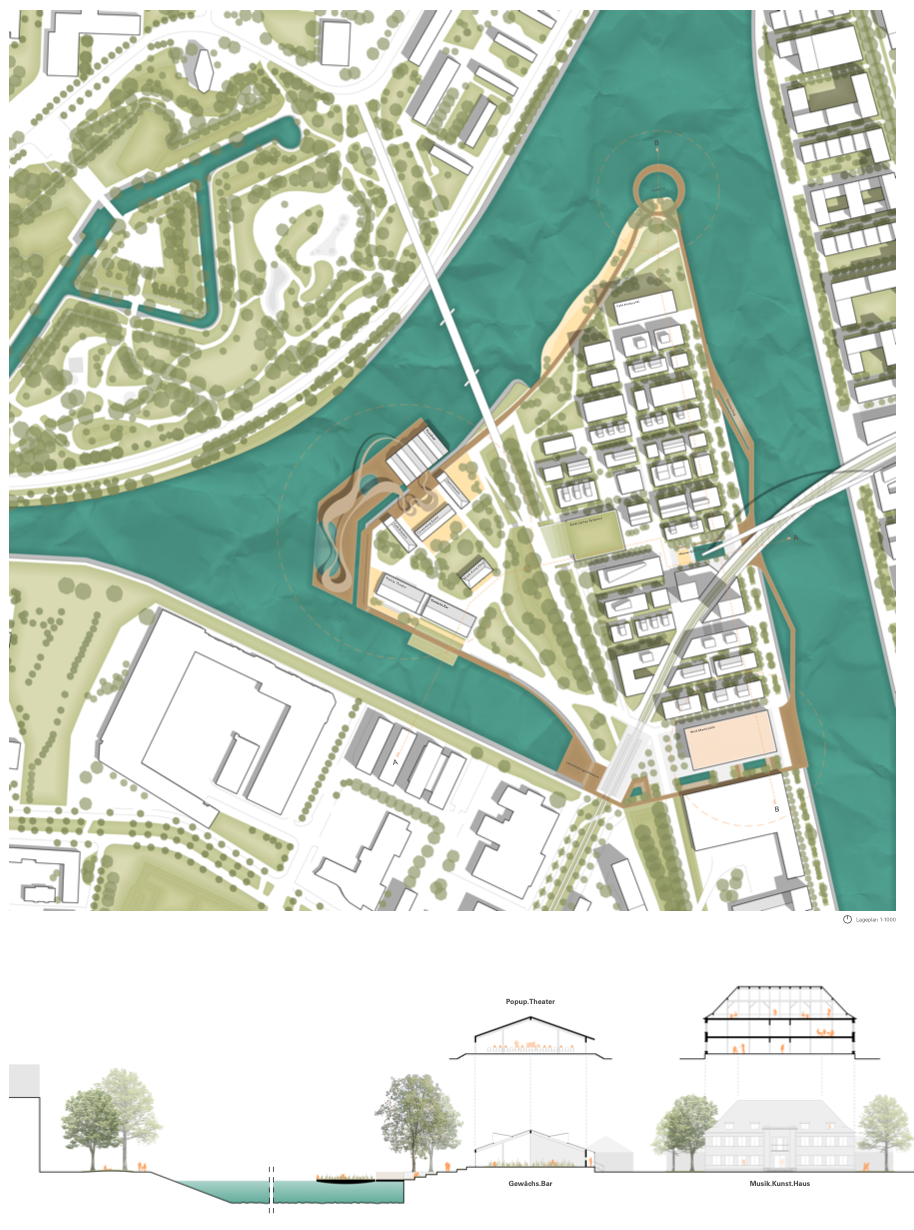 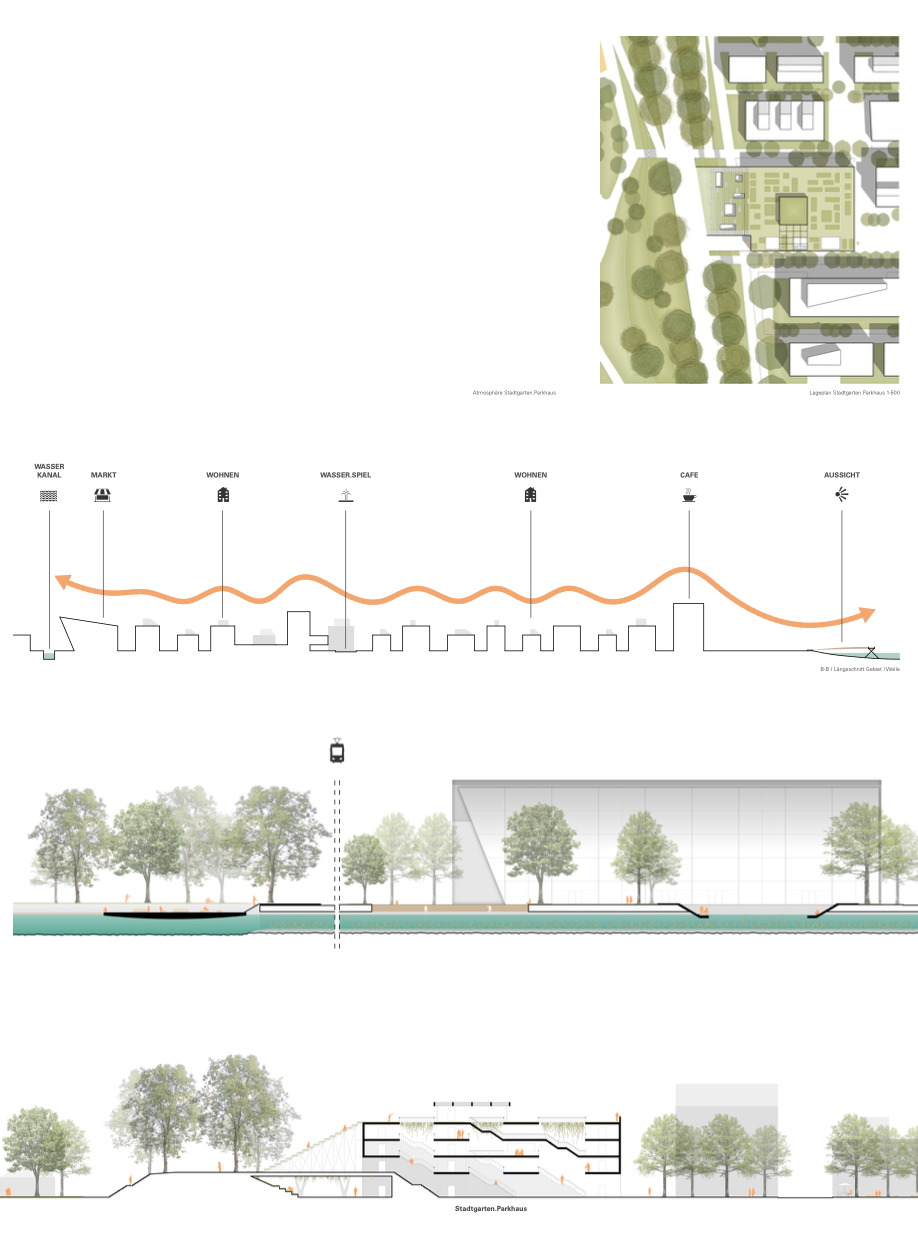 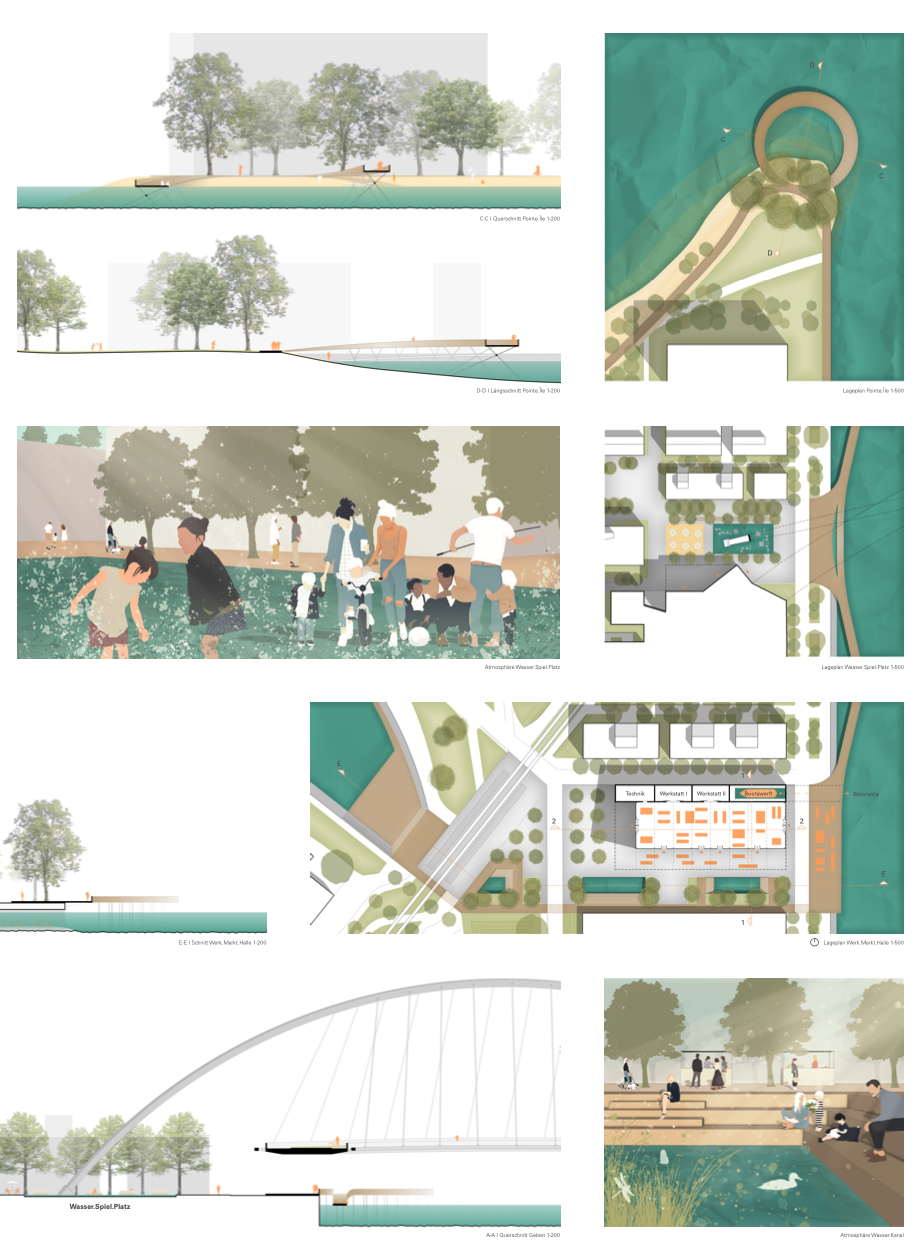 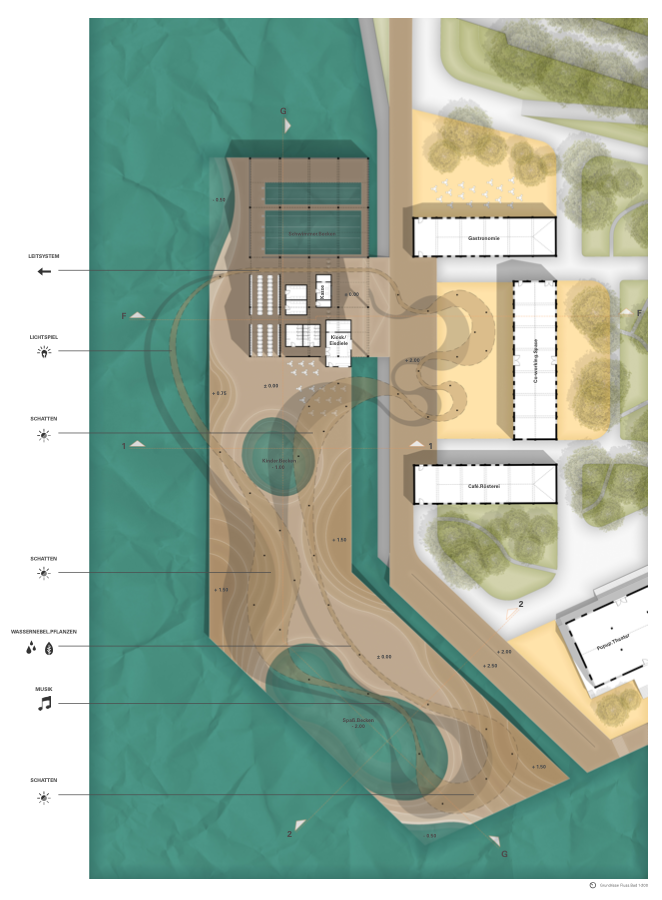 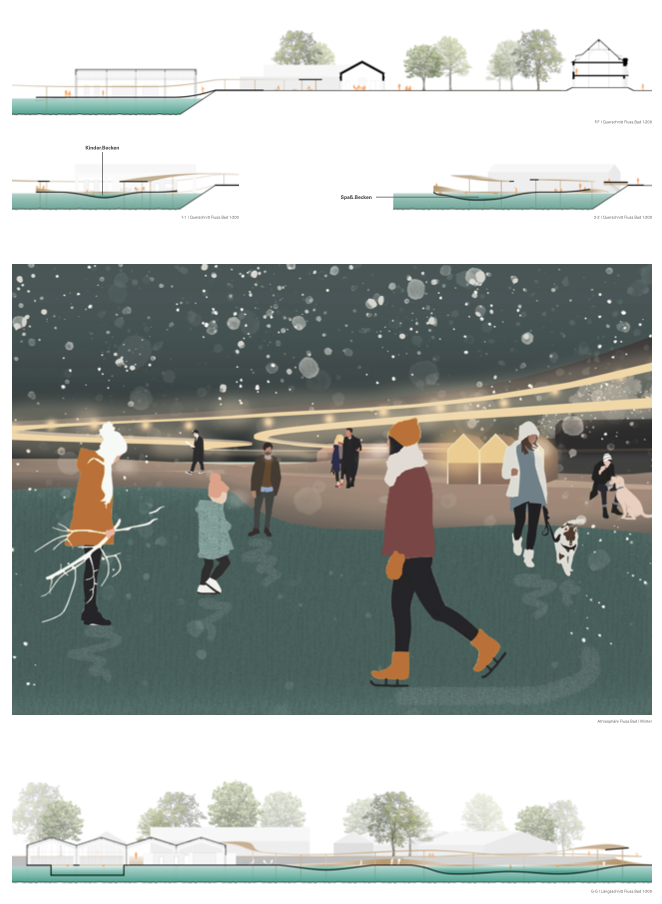